Google ATAP shows off Project Vault, a microSD card that gives you a security boost 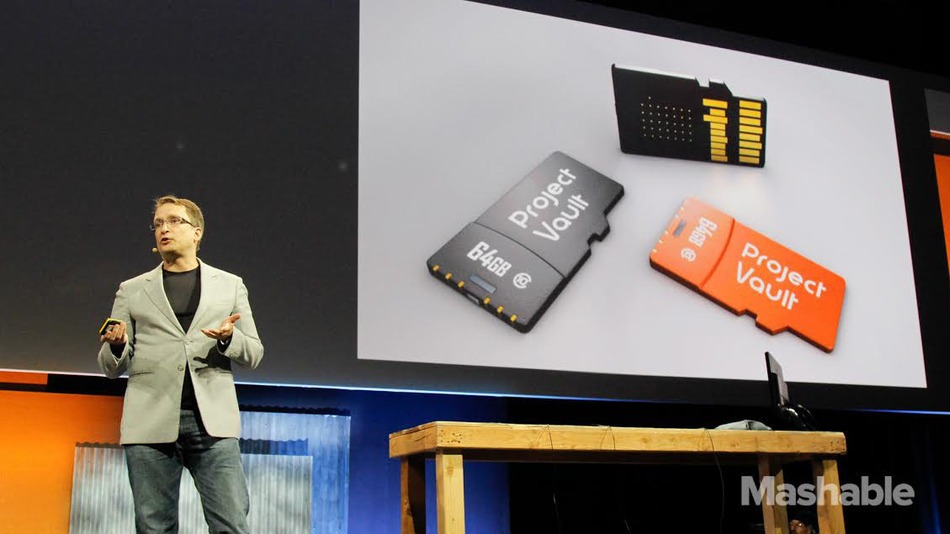 Today was Google ATAPâ€™s day to shine at Google I/O, and it took the opportunity to announce a new security-focused product.

Project Vault is the latest effort from Google ATAP, and itâ€™s basically a little secure computer on a microSD card. Yep, that regular olâ€™ microSD card holds an ARM processor, NFC, an antenna, and 4GB of storage set aside for secure content. The card is running some custom software called the Real Time Operating System. And what makes the Project Vault card even more interesting is that it can be inserted into any phone, tablet, or computer, and those devices will just see it as a regular microSD card.

So what kind of applications does Project Vault have? Google demoed at couple to the I/O crowd. The first was an encrypted chat that can be used between two Project Vault users. The chats are secured and sent using Vaultâ€™s encrypted channel, so the phone or whatever youâ€™ve got your SD card in never has a chance to view the data being sent.

The second demo shows how Project Vault can be used to eliminate passwords from your life but keep your logins and data secure. Project Vault can learn your usage and habits, like your typing patterns, and determine when youâ€™re using the phone and when youâ€™re not. If Project Vault knows that itâ€™s you using the device, it can automatically log you into services. But if it detects patterns that arenâ€™t your own, it can know that itâ€™s not you using the phone. Google says that this method of security is 10 times more secure than a regular password.

Project Vault is still in early days, and so itâ€™s not clear when it might be ready for consumer use. Anyone interested in tinkering with the development kit for Project Vault can do so right now by checking out github.

So far, Project Vault looks pretty awesome. While there are already all kinds of methods of keeping your logins and data secure, ranging from writing down stuff on a stick note to password management software, Project Vault seems a bit more advanced. Not only can it easily be used in all kinds of different devices, but it saves you the trouble of having to enter logins or remember a master password, and it can easily keep others from accessing your logins with little effort from you.