Facebook Marketplace will help you sell your things in the app 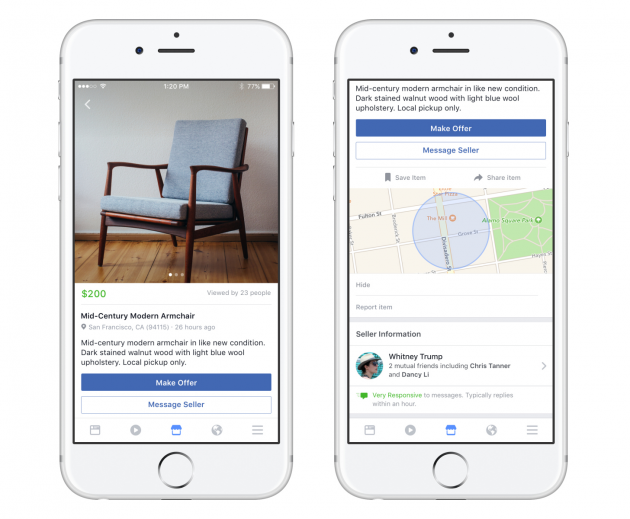 At the same time thatÂ Facebook is rolling out Messenger Lite in selectÂ countries, it’s also hoping to make it easier for its users to sell their stuff.

Facebook is launching what it calls Marketplace. It will find a permanent position in the Facebook app’s bottom row of icons; it’s actually replacing the standard Facebook Messenger icon, since that’s a standalone app these days. The new Marketplace is represented by a shop icon that looks like a little storefront.

When a user heads into the Marketplace, they’ll be able to buy and sell things with other Facebook users. Those items can includeÂ photos, and Marketplace will show users all the stuff that’s near them. Facebook’s Marketplace will let users search for specific items, too.

ItemÂ pages can have quite a bit of information on display, including a user’s name, mutual friends, price, pictures, and the location of the items for sale. Users can initiate a Facebook Messenger chat right from the landing page if they want to buy the stuff.

Marketplace will also haveÂ a “Your Items” list that will show all of the things you’ve listed through the service as well as yourÂ saved items, products, and chats you’ve had with other Facebook users.

Facebook Marketplace will only be available for Facebook users that are 18 years or older. It will be rolling out for Android users, as well as iOS users, in the United States, New Zealand, and Australia.