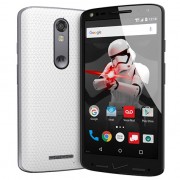 Are you a Star Wars fan? If so, and you also happen to be a Verizon customer whose contract has just ended (we know, it’s a bit of a stretch), you’re in luck. Verizon has announced that the Droid Turbo 2 will be getting Star Wars-themed customizations starting December 11th.

Some of the options you’ll have are character themes like BB-8, a First Order Storm Trooper, Kylo Ren, Poe Dameron, and Rey. Each will have a custom color paletteÂ and backplate. You’ll also get some Star Wars wallpapers through an app on the Play Store.

Verizon will also be hosting a livestream of the red carpet of the world premier of The Force Awakens. Using Twitter, people will even be able to ask questions that a Verizon correspondent will ask the stars during the premier. The carrier is also giving away 12,000 opening weekend tickets to the movie for Verizon customers on TheoryWars.com