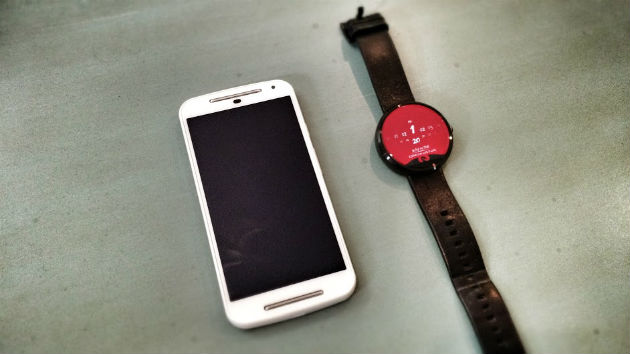 Motorola seems to be perpetually running some kind of deal on at least one of its devices, and for just the next two hours, the spotlight is on both the second generation Moto G and the Moto 360.

If you happen to be in the market for both a new budget smartphone and a smartwatch, or if you can team up with someone else that needs the other half of that equation, then you can save up to $129 on this duo.

The Moto G (2014) remains easily my favorite budget smartphone to date as long as you can get by without LTE. The feel of the device is fantastic, very reminiscent of the first Moto X, and the ability to swap out the back is a fun touch. The front-facing speakers are unmatched by anything in this price range, and while a 1080p screen would be nice, it’s far from a deal breaker at the 5-inch screen size for me.

The Moto 360 remains on my wrist everyday and will be among the few first generation smartwatches to receive the full features of the upcoming Android Wear update. As long as the “flat tire” look doesn’t bother you, this smartwatch is still one of the best looking options out there, and buying direct through Motorola you get to use Moto Maker and customize it as you will.

All in all this is a solid deal for the right buyer, just remember you only have until 3 p.m. Central time today to take advantage.