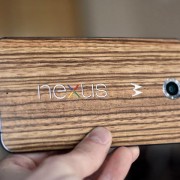 You can’t deny that my Nexus 6 looks awesome.

I personally don’t like to use cases on my phones. I know it’s stupid. I realize I’mÂ wielding an expensive piece of technology aroundÂ and even if I haveÂ insurance on it, it’s still going toÂ cost me hundreds of dollars to replace if I break it.Â I realizeÂ my odds are betterÂ of not breaking it if I use a case that can absorbÂ some of the energy from theÂ impact of a fall. But up until the NexusÂ 6, I’ve chosen to use my device naked. Call me an idiot if you want, but I just like it better.

One thing that’s always worked in my favor is what I call grippability. I wouldn’t say I have large hands, but non-phablet phones have always been small enough that I could use them one-handed with relative ease. Many of my previous devices, like the Nexus 5, have had a soft touch plastic that made themÂ very grippable. The Nexus 4 had a glass back thatÂ I thought was very grippy. Unfortunately, the Nexus 6 has gone away from those materials and textures and has a back that is pretty slick, making me wary of using the device naked.

So, might a case fix my grippablity issue? It could. But theÂ NexusÂ 6 is justÂ a dang big phone.Â I already don’t like using cases, and I definitelyÂ don’t want to make the Nexus 6 even wider. What other options might I have to increase grippiness yet not increase bulk?

Then I had an idea: skins.

I reached out to dbrand regarding theirÂ skins’ grippability. RatherÂ than just answer me, they decided to send me some skins to test forÂ myself. I don’t have a very scientific method to test grippability, but I decided to poll several people to rank the different skins I was sent. The average results are below in order of most grippy to least:

I wish I would have tried my gippability test before I put the Zebra Wood skin on, because it just looks so rad and I’ll be sad to take it off. But I probably would have gone with the carbon fiber skin and probably will soon. Also, I wouldn’t say that any of these skins are extremelyÂ grippy. None of them compare to the grip of a slicone case, but they’re definitely better than the Nexus 6′s bare back.

Unfortunately, the special edition Nexus “X” inserts I have on the device inÂ the feature image and gallery are no longer available. Apparently I caught the tail end of that limited edition series. However, there are still lots of awesome combinations you can come up with to make your phone look awesome. There are manyÂ different finishes and colors to chose from. The only onesÂ IÂ didn’t try out wereÂ the “true color” skins. For the Nexus 6, you can customize inserts for the “M” logo and a circle around the camera. Additionally, you can even just have the “X” cutout or have the Nexus logo covered all together.

I was a little nervous about installation because I hate installing stuff like this, but dbrand has some great how-to videos, and the process was actually super smooth. The Zerbra Wood cutout with all the inserts was aÂ great fit. It left me very impressed.

Now, I’m not saying skins are a replacement for a case. What I’m saying is that yourÂ grippabilityÂ might be improved with a skin on your phone over a naked device. I doubt many iPhone users read this blog, but that’s another dang slippery phone that would be a prime target for an awesome dbrand skin. dbrand has skins for all sorts of phones, including the Samsung Galaxy S6 and S6 edge, HTC One M9, and LG G4. They even do tablets, gaming controllers, MacBooks, and wearables. SoÂ check out the dbrand website and pick out your favorite combination for your device. They’reÂ only $10 plus $3 shipping in the U.S., which is great value in my opinion. The most likely outcome from putting a dbrand skin on your phone is it that it will look betterÂ than your friend’s and you’ll get cool points.

What do you think of skins on your phones? What about dbrand skins? Are you using a dbrand skin? Does it make you feel awesome like I do? Let us know your thoughts by commenting below.