Cyanogen partners with Truecaller for caller ID and spam prevention 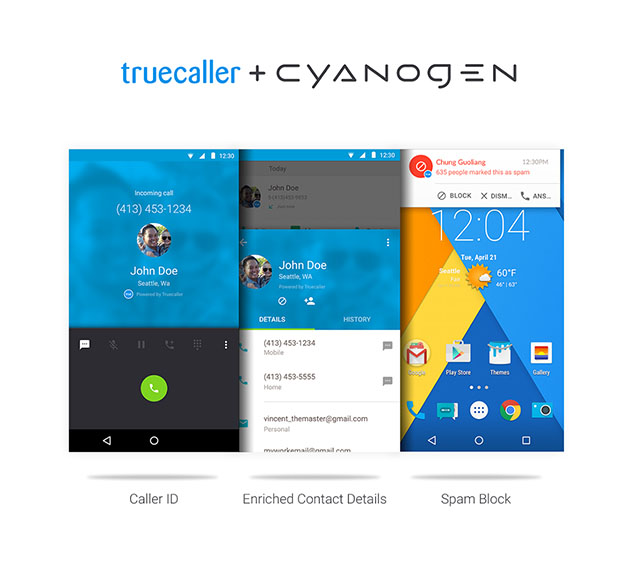 Cyanogen has partnered with the service Truecaller to improve the stock dialer and call experience in Cyanogen OS. Truecaller provides caller ID for unknown numbers, allowing you to know who’s calling, even if they’re not in your contacts. It also features spam detection. This announcement means that instead of having a separate app for caller ID, all the information will be shown in the stock OS elements, like when you receive calls.

While this is pretty cool for CyanogenMod users, it provides the most value to manufacturers that use the OS on devices. For a device to come with advanced caller ID integrated into the OS with no extra work involved is a big deal. All future Cyanogen-powered devices will come with Truecaller, and the update to the ROM will be released in the coming months.

If you’re interested in the service outside of CyanogenMod, you can always download the app and dialer on the Play Store, with the app also available on the iOS App Store sans dialer. Let us know what you think of this announcement in the comments!

Stockholm â€“ May 7, 2015 — Truecaller today announce an agreement with Cyanogen Inc. that aims to enhance the static dialer experience on Android devices. Truecaller will be seamlessly integrated into the native phone app on the Cyanogen operating system, making Truecallerâ€™s spam blocking and caller ID features available on future mobile devices that ship with Cyanogen OS, and will also be made available to existing users via over-the-air update.

Cyanogen is a leading mobile operating system company that is evolving the Android platform by creating a more open, level playing field for third-party developed apps and services. Cyanogen OS is the companyâ€™s commercial operating system, built on Android. Truecaller is a global search company that is home to more than 100 million global users who use the service everyday to report and block spam, identify calls, and search for contacts among a database of more than 1.6 billion contact numbers. Similar to the way that the main Truecaller app and dial pad replacement app Truedialer are used, the new dialer experience coming to Cyanogen OS represents a big improvement over stock Android. Together, the companies bring an improved dialer experience to Cyanogen users with the ability to detect known spammers and identify unknown callers in both live calls and your call history.

â€œTogether with Cyanogen, weâ€™re helping OEMs deliver the best possible experience to their users,â€ said Tom Hsieh, VP of Partnerships and Growth at Truecaller. â€œThis is another in a series of strategic partnerships weâ€™ve forged that radically advances the current mobile phonebook experience and upgrades what native dial pad apps can offer.â€

On upcoming device launches that ship with Cyanogen OS, Truecaller services will be fully integrated into the dialer. Over-the-air update to existing users will be made available in the coming months.

For consumers who want a better communications experience on other mobile platforms outside of Cyanogen OS, Truecaller is also available as a free, standalone app for Google Play, the Apple App Store, BlackBerry, Nokia, and Windows Phone. Additionally, the free dial pad replacement app, Truedialer is available on Android and Windows Phone.

About Truecaller
Truecaller is a leading search technology company that is transforming the phonebook with a set of intelligent and useful services. Headquartered in Stockholm, Sweden, Truecaller was founded in 2009 by Alan Mamedi and Nami Zarringhalam, and is available on all Internet-enabled devices and on the web. Investors include Sequoia Capital, Atomico and Kleiner Perkins Caufield Byers. For more information visit www.truecaller.com.

About Cyanogen Inc.
Cyanogen is reimagining mobile computing, giving power to the people to customize their mobile device and content experiences. The CYANOGENÂ® operating system is built on Android and known for its revolutionary personalization features, intuitive interface, speed, improved battery life, and enhanced security. With a rapidly growing global user base and a vibrant community of developers, weâ€™re intelligently connecting smartphone and tablet consumers to people, apps, and things they love. For more information, visit Cyanogen’s website, Google+, Twitter, and Facebook.