Recall that the Samsung Galaxy S4 was released back in March 2013 and reached users a month later. With a trademark and 2 GB of RAM it has survived very well during these two years. Andorid 4.2.2 Jelly Bean with standard has been updated to 5.0.1 Lollipop. Upgrading to 5.1.1 seems to have escaped and may Marshmallow follow the same path.

Galaxy S4 update to Android Marshmallow
The list of Samsung devices that will have the new version of Android currently only takes into account the high-end terminals of the Korean brand that have come to light this year. The devices to be left out, unless major surprise, are those that form part of previous generations as the Galaxy S5 and the Galaxy S4. PhoneArena published a list that could see as updating the S4 to Marshmallow was in ‘not approved’.

Of course, being objective and looking at the more than two years with the S4 to the back makes it very difficult to keep in Samsung plans to upgrade. The last hope is in the hands of the community, only through a custom ROM can enjoy Marshmallow on the Galaxy S4. More information further down in the section on Custom ROMs.

Galaxy S4 update to Android 5.0.1 Lollipop
Samsung finally confirmed that the Galaxy S4 receive the update to Android Lollipop. The update is carried out via OTA for almost all models including the version with LTE. Excluded from the list are some models specifically flagged by operators such as T-Mobile in the United States or in Mexico Telcel. If your Galaxy S4 has not received the update in your country you can update manually. We explain all the details a little below

Marshmallow Custom Android ROMs for Galaxy S4
There is already available some ROMs to install Marshmallow for the Galaxy S4. These are the ones in December they seem to be more stable.

6.0.1 crDroidAndroid Marshmallow (based on CM13)
Kushan optimized unofficial CM13
JDC Team AOSP 6.0 MDB08M Masrhmallow
The most adept of the three has is naturally crDroidAndroid, since it has the latest Android 6.0.1 version Marshmallow. The installation is quite similar in all cases except in the thread of a process ROM specifically specified.

To flash one of these roms need to have installed a Custom Recovey as CWM or TWRP. Copy the ROM file and gapps to the internal memory or microSD card. We will make the system wipes, dalvik, data and CAHE. Install the rom from where the store in the internal memory or microSD card, and do the same with the gapps. Once installed all carry out a factory reset and will restart. 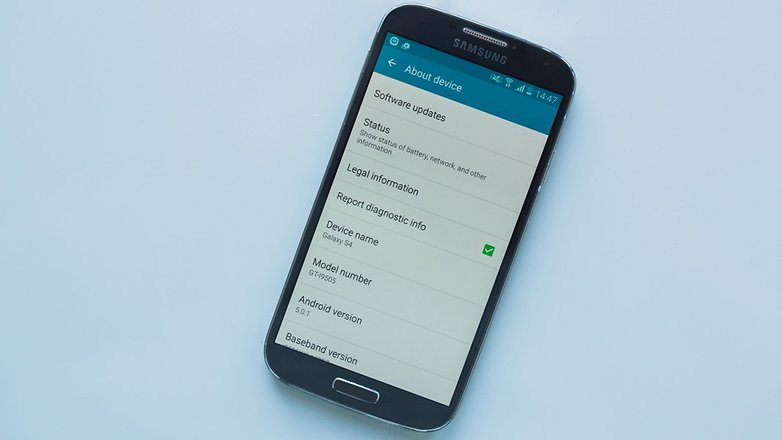 Android OTA update
Normally at the time an official update is available you will receive a notification to update via OTA. The download of the update should be done through a Wi-Fi and you must have enough internal memory to download and actalizar.

If you have no notification You can check pending official updates in Settings -> About phone -> System updates, we can check whether you have the ability to update the terminal. Depending on the operator you can update your phone a little later than others.

Manually installing the official firmware on Galaxy S4
The official Android 5.0.1 firmware with Lollipop for different models and countries can be downloaded from SamMobile entering the name of the device and choosing the exact model you have.

NOTE: Neither AndroidPIT nor take responsibility for errors that occurred during or after the process of updating the terminal and malfunction or breakage of the terminal. You will update the phone at your own risk.

Download drivers Samsung.
Download the firmware Android 5.0.1 Galaxy S4 Lollipop.
Download Odin v3.09
Charge your S4 to have at least 80% of the battery.
Activate USB debugging on your phone developer options (to appear 10 times in a row must press the build number in the phone information).
Make a backup of your data to prevent loss.
Steps to follow

Unzip the downloaded firmware on your PC.
Open Odin and immediately start your phone into download mode (volume down + power button + Home button).
S4 connects via USB and let Odin detects (one confirming message).
Check the box of Auto-reboot and F.Reset Time. Make sure that Re-Partition is not marked.
AP click and find the file tar.md5 appeared to unzip the firmware.
When the process is complete, you will see the word PASS.
The phone will reboot and start will appear in the home screen of Android Lollipop.
Restart the phone in recovery mode, with the same combination that download mode, and executes a “wipe cache partition” to remove your data (which you previously saved with a backup). This step is not really necessary, but saves having errors.

How about Android Lollipop in the Galaxy S4? Would you like to try Marshmallow?