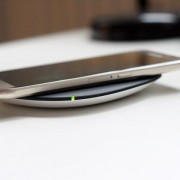 Belkin recently released a whole line of products that are specifically meantÂ toÂ be awesome with your Samsung Galaxy S6. Will they work with other devices? Yes, all except forÂ the case and potentially the arm bands, which we weren’t sent for review. Regardless, Belkin sent us several items in their new line, including their Qi Wireless Charging Pad. I’m not going to review every piece of kit Belkin sent us individually, but I felt that the Wireless Charging Pad fell into its own category and deserved its own post. We tested the Belkin wireless charger with the Nexus 6, Samsung Galaxy S6, and Nexus 7 2013, each with and without cases. The case shown in the pictures is the Belkin Grip Candy SE.

I think the Belkin Qi Wireless Charging Pad looks great and is both built and designed well. It has a black, soft touch plastic top that provides some gripÂ on your phone to prevent it fromÂ sliding around when bumped.Â Your phone also won’t be sliding off the charger due to the surface being completely flat or parallel with the surface the charger is on. The sides of the charger are white, and I enjoy the black and white look of the device.Â Lastly, the charger has a grippy bottom to hold the charger in place on whatever surface you choose to place it on.

Belkin’s Qi Wireless Charging PadÂ comes with a white microUSBÂ cable and wall adapter. Wireless chargers don’t always come with wall adapters, so it’s nice that this one does. I actually had an issue with the Fonesalesman Bamboo WoodPuck that was causedÂ byÂ a problemÂ with the random AC adapter I was using with it. It took me a while to find the root cause of the issue, and so for a whileÂ I thought the Bamboo WoodPuck sucked, but it was the AC adapter the whole time. So again, it’s nice that Belkin’s Qi WirelessÂ Charging Pad comes with a wall adapter. However, you could easily use it with your phone’s charger if you don’tÂ want to bring another one on aÂ trip.

When the Belkin Qi Wireless Charging Pad Â is charging, a green LED blinks to let you know that it’s powering up your device. There are no audible sounds.It has a 1 Amp output, which Belkin claims will allow you to not sacrifice charging speed. This is a little misleading. If you were using a low-amp charger this is could be true, but compared to Samsung’s turbo charger that comes with the Galaxy S6, there’s no real comparison: the turbo charger will charge your S6 significantly faster. But wireless charging is so convenient I think the sacrifice in speed it worth it.

The Belkin Charging Pad does come with a one year limited warranty whereÂ many cheaper chargers may not. The charger was just announced the beginning of April, so you can be the first of your friends to own one by purchasing the device on Belkin’s website or Amazon. My guess is that the wireless charger will also be available at brick and mortar stores like Target in the near future.

What are your thoughts on theÂ Belkin Qi Wireless Charging Pad? Do you like the looks of it too? On the hunt for a Wireless charger? Already have one you like? Do you own this charger and want to share your thoughts about it? Let the AAM community know your thoughts by commenting below!