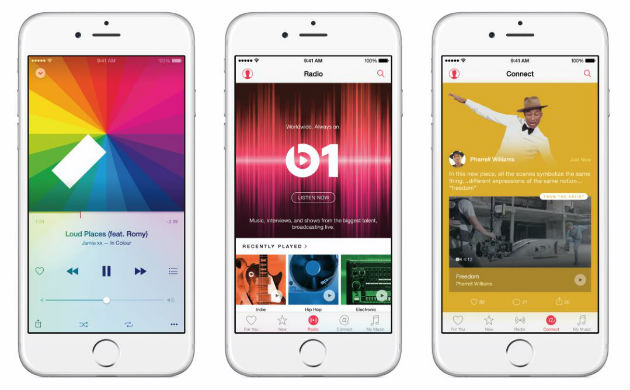 Google I/O is often almost as much of a treasure trove for Apple fans as it is for Android fans given that Google makesÂ some of the best software and services across both platforms. WWDC, on the other hand, typically has nothing to offer Android fans, save for snarking back and forth with Apple fans on Twitter over whoÂ created what first or better.

So it came as a bit of a surprise today when Apple announced that its newly unveiled music service, logically named Apple Music, will be coming to Android this fall.

We find ourselves in the rare position of actually needing to inform you about an Apple service, because you may theoretically want to use it.

Apple Music is a streaming music service that’ll haveÂ more thanÂ 30 million songs when it launches first on iOS, OS X and PCs on June 30th, and then Android to follow this fall. Like Google’s offering, you will also be able to have your own music live within the service.

Apple is leaning hard on human curation, something the Beats streaming service was also enthusiastic about, and a “For You” section is located centrally in the app with recommended albums, new releases and playlists based on your listening habits.

There’s also Siri integration that allows you to ask things like “Play me the best songs from 1994″ or “What was the number one song in February 2011?”, but there was no discussion of how or if those features would carry over to Android.

Apple is also launching Beats1 within Apple Music, a live radio station broadcasting 24 hours a day worldwide. This station is dedicated to music and music culture, and it’s being spearheaded by DJs Zane Lowe, Ebro Darden and Julie Adenuga. Additional channels in Apple Music radio will take a more traditional approach of specific genres of music, but will also be human created.

Connect is sort of a social network inside Apple Music for bands to post content (photos, videos, lyrics songs) for their fans to comment on, like or share.Â This didn’t work out for Apple the last time it existed and they called it Ping, but they are a few years older and perhaps wiser, so maybe it’ll stick.

I’m absolutely burying the lede by not getting to the pricing for Apple Music until now. For a single user it will be the same $9.99 per month that virtually every service has gravitated to in recent years, but there is also a family plan for up to 6 users for just $14.99 a month. That family pricing is considerably better than what we have seen from most of the other major players.

Notably, Apple will also be offering a three month free trial for all new users.

So will you give Apple Music a chance when it comes to Android this fall?