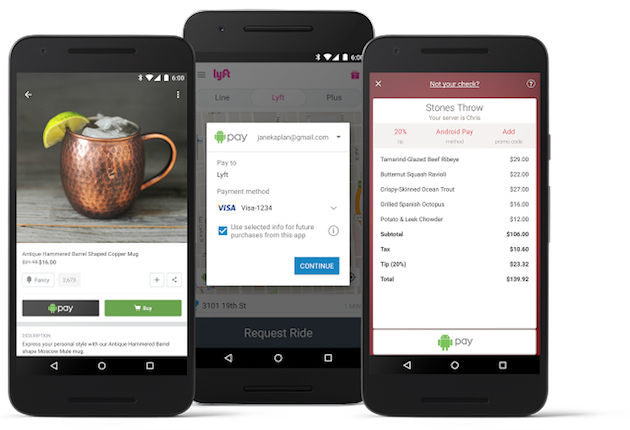 Android Pay launched this fall and it has already seen rapid adoption from users. Now it’s time for developers to get in on the fun.

On Tuesday, the Official Android Blog announcedÂ that, beginning today, Android Pay now works in Android applications. That means that users won’t have to pull out their card when making a purchase on their mobile device, and entering in the information is no longer a necessary step, either, as Android Pay saves all the pertinent details for a quick checkout procedure.

There are already plenty of different apps that support Android Pay, including Lyft, Doordash, Fancy, Instacart, OpenTable, Spring, and many others. The list is obviously still growing, and the Android team has included an Android Pay API on a dedicated developer site to make sure that support continues to grow.

There are some deals, too, to take note of when you use Apple Pay in select apps:

“For a limited time, youâ€™ll also get special savings by using Android Pay in select appsâ€”from $20 off on OpenTable* dining, $10 off your Lyft ride*, $10 off DoorDash* to 30% off Vinted*â€”thereâ€™s something for everyone.”

That’s not all, though. Android Pay is coming to Australia in the first half of 2016, too. The post says that many of the country’s major financial institutions are in negotiations, including Westpac, ANZ and many others, to add support for the mobile payment option through their MasterCard and Visa cards.

Have you tried out Android Pay yet?