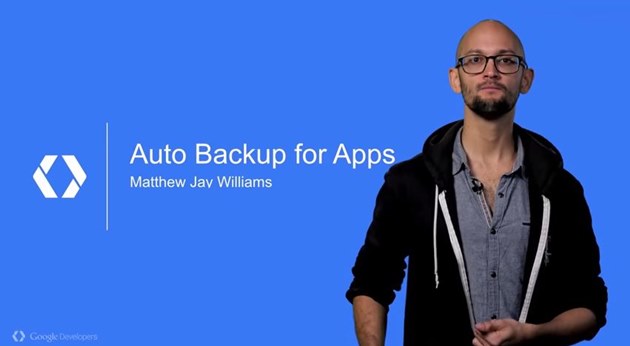 Google I/O 2015 has brought a host of announcements regarding new Android M features and updates to apps we already know and love. Something that was not mentioned during yesterday’s keynote was the auto backup feature that will come with Android M.

Rather than storing app data on you device, Android M will allow developers to store app data on your Google Drive. This means that if you ever get a new phone or need to get your phone replaced, as soon as you re-install your favorite apps and open them, they’ll be right back to the way they were on your last device. I’m hoping this will be the same across devices too like between phones and tablets. Regardless, the app will use your Google Account for its login data, and by the time you open the app on the new device, all of theÂ previous data will be there. It sounds like it should be a seamless experience.

One of the coolest parts about this Android M Auto Backup is how easy it sounds for developers to implement. Unfortunately, it will only work for the Android M operating system versions and up, but it’s so easy to implement your favorite apps will already have Auto Backup by the time you get there. You’ll never have to re-setup apps again. All that developers need to do is download the M developer SDK and rebuild the app against it to begin having the apps auto backup to your Google Drive. Obviously there are ways for developers to control what is and isn’t backed up if they want, but it sounds like Google has made this a fairly straightforward process.

So, are apps going to hog a bunch of your mobile data now that they’re backing up to Google Drive all the time? No. Backups will only run when the device is idle, connected to WiFi, and charging. Plus,Â they will not backup more than once per day, and the apps have no control over scheduling the backups. Additionally, Google is only allowing apps to backup a total of 25MB of data. This data is encrypted and does not count against your Drive quota (which is rad). If the app hits the 25MB limit, it willÂ stop backing up. Therefore, developers need to keep their stored data tidy so that we can take advantage of this awesomeness.

So, who’s excited about this new Android M feature? I know I am. Maybe it’s because I work for Android and Me and handle lots of different phones, but redoing app setting all the time does get old. I’m ready for a smarter, more seamless experience. How about you? If you want to learn more, check out the video in the post. Let us know your thoughts in the comments below!