Amazon Fire TV and Tablets still 25-30% off through Monday 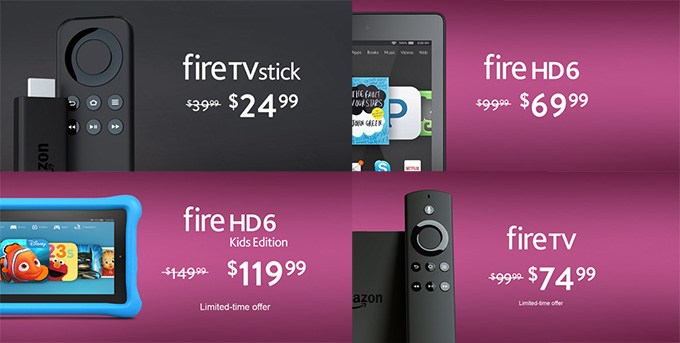 Black Friday may have come and gone, but Amazon is still in a festive mood. If you’re a fan of Amazon’s Fire TV and Fire Tablets, you can buy one with discounts ranging from 25-30%. The Amazon Fire TV StickÂ is our number one recommendation if you’re looking for something a little more robust than Chromecast. The Fire TV Stick acts as a stand-alone media device and does not require you to control your media from your smartphone. If you want even more power and the ability to turn you TV into an Android gaming console, theÂ Amazon Fire TV is a steal at $75. Just don’t forget to pick up the Amazon Fire Game Controller as well.

Android purists will scoff at the idea of using any of Amazon’s tablets since they use a forked version of Android and don’t feature the Google Play store. That being said, Amazon’s Android app store has quite a comprehensive app assortment and the UI on the Fire tablets has gotten a lot better in the past 12 months.

Oh, and if you haven’t picked up the Amazon Echo yet, we highly recommend that you do. The Echo’s price has been reduced to $149 – $30 less than its usual price.